Do you have enough jawbone for dental implants?

We won’t know that until you get a CBCT image of your jaw.  If your tooth is removed and your jawbone is healthy and thick, the missing tooth socket will begin to fill naturally in two or three months.  However, if your jawbone is thin (such as the areas of your front teeth), then this healing process becomes unpredictable.  In such cases when you don’t have enough bone thickness, bone grafting is often required.

What is bone grafting?

Bone grafting is a surgical procedure that replaces missing or damaged bone with transplanted bone to repair and rebuild.  They are often placed immediately after a tooth is extracted to allow your body to preserve the ridge as best as possible.  It is important to know that if implants are not placed timely, during or after bone grafting, we will expect the bone to progressively reduce in height and width.  Until an implant is placed, bone degradation will occur because the titanium post serves as a root replacement (and your body accepts it as that, as if a tooth is present).

What happens if there’s not enough bone?

After a tooth goes missing, the jawbone surrounding that missing tooth begins to deteriorate and thin.  As time passes, an indentation in the jaw’s appearance and reduction in volume can be observed. The surrounding bone is then compromised and becomes unsuitable for the safe placement of dental implants.  In such a case, bone grafts can be placed next to the thin and compromised bone, which takes about six months (or up to a year) to fully fuse and heal.  After which, an implant can be placed. 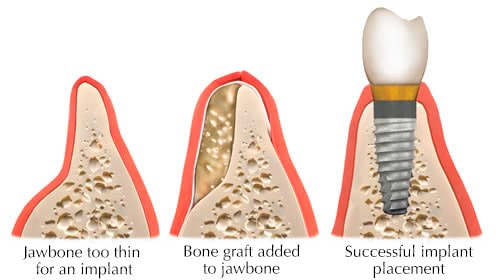 The latest advancements in bone grafting does not just replace bone loss, but also promotes bone regeneration.  Such advancements are used with extreme precision by our experienced implant specialists, so that implants can be positioned with the appropriate height and thickness, allowing for a stable and long-lasting placement. 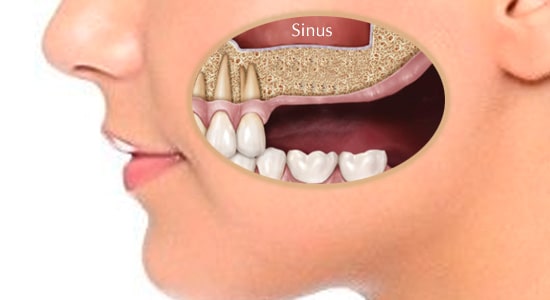 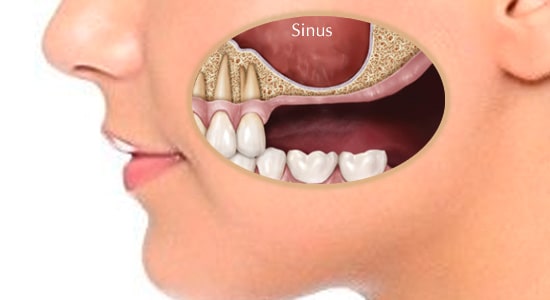 Sinuses are above your upper jaw, behind your cheeks.  They are like an empty cave with a lot of room.  Some upper tooth roots extends into the sinuses.  And when they’re extracted or lost, there is often only thin amount of jawbone that separates the sinus and the mouth.  This amount of bone may not be adequate to stabilize a dental implant. 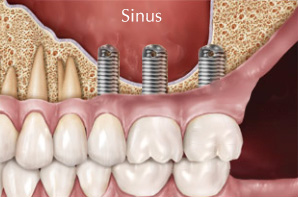 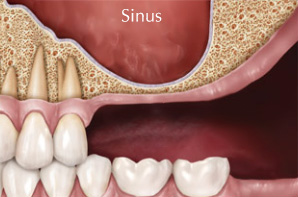 Not enough bone to support implants

In such a case, you will need a bone graft in the sinus cavities of your upper jaw.  This procedure is called a “sinus lift”, and is routinely performed in our office with local anesthesia.  During this surgical procedure, the sinus membrane will be located and lifted upward.  Bone will then be transplanted to restore the jawbone height, that gives enough margin for the length of a dental implant.  This is often performed on the same appointment as your implant placement.

However, if a significant amount of bone is missing, then the sinus lift will be performed first and a period of healing will follow before implants are placed. 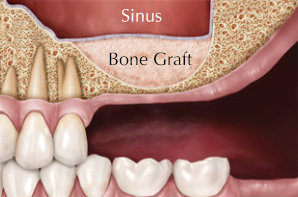 The bone graft will mimic your real jawbone and offer the same foundational support for your dental implants.  The titanium post of a dental implant will stabilize bone height just like a natural tooth root would.  This protects you from future bone loss where the dental implant is placed. 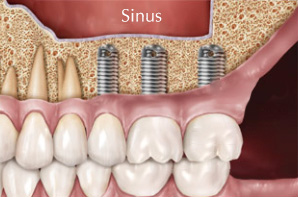 This article is intended to promote understanding of and knowledge about general oral health topics. It is not intended to be a substitute for professional advice, diagnosis or treatment. Always seek the advice of your dentist or other qualified healthcare provider with any questions you may have regarding a medical condition or treatment.