What is Sleep Apnea?

Because this disorder disrupts normal sleep, many people who are affected wake up groggy and feel fatigue throughout the day.  This may negatively affect school or work performance, as the ability to focus and stay alert diminish.  And in the some severe cases, if left untreated, may be fatal.

There are three types of sleep apnea: obstructive, central, and mixed.  Obstructive sleep apnea (OSA) is the most common of the three.  Obstructive sleep apnea occurs when the upper airway is blocked either partly or completely during sleep.  When it occurs, the diaphragm and chest muscles exert more effort as the pressure increases to open the airway.  Breathing usually resumes with a loud gasp or body shake.  These occurrences can reduce the flow of oxygen to vital organs and cause heart rhythm problems.

In central sleep apnea, the airway is not obstructed, but the brain fails to signal the muscles to breathe due to instability in the respiratory control center.  Central apnea is connected to the central nervous system, and therefore, it is not treated by oral appliance therapy.  Mixed sleep apnea is both obstructive and central sleep apnea. 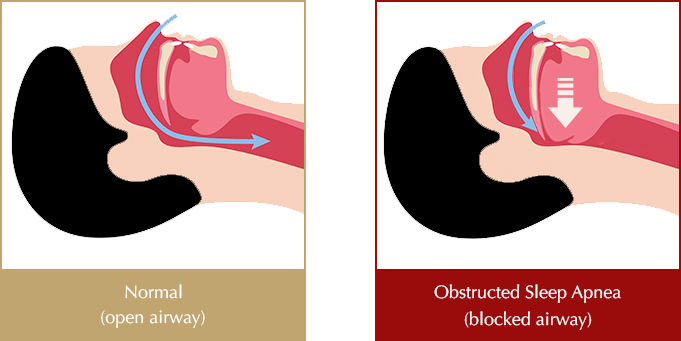 Who is at risk of Obstructive Sleep Apnea (OSA)?

25% of men and 10% of women have obstructive sleep apnea.  It can affect people of all ages, including babies and children.  It is particularly prevalent amongst those older than 40 who are overweight.

There are certain physical traits that lend itself to this disorder.  These include large necks, excessive fat, and structural defects of the upper airway, such as nasal obstructions, enlarged tonsils, or a small jaw with an overbite.

Obstructive sleep apnea occurs by an airway blockage, usually when the soft tissue in the rear of the throat or tongue collapses during sleep.  Central sleep apnea usually occurs in patients with a central nervous system dysfunction, like those who’ve had a stroke or who have neuromuscular disorders.

What are the symptoms of Obstructive Sleep Apnea (OSA)?

Often the first signs of OSA are recognized by other people, whether a spouse, roommate, or anyone who may sleep nearby.  Many of those affected have no sleep complaints.  The following include the most common OSA symptoms:

Symptoms in children may not be as obvious, such as:

What are the effects of Obstructive Sleep Apnea (OSA)?

What if I have been diagnosed with Obstructive Sleep Apnea (OSA)?

If your doctor has found that you have OSA, you can be offered treatment options.  At Brushwell Dental, we provide oral appliance therapy for OSA.

This article is intended to promote understanding of and knowledge about general oral health topics. It is not intended to be a substitute for professional advice, diagnosis or treatment. Always seek the advice of your dentist or other qualified healthcare provider with any questions you may have regarding a medical condition or treatment.